The "Sentiero della Pace", crossed in 2004 during the "Summit for Peace" and so named in 2005 during the National Paths Meeting and SNE, begins as dirt track from the new hospital, at 950 mt. above sea level. It proceeds in its initial part along the Reggia Trazzera No. 301, which once connected Petralia with Castelbuono.
After just over a kilometer you reach San Brancato medieval humpback bridge; passed the bridge, a little later you can go left on a uphill muletrack that reaches Pizzo Sant'Otiero slopes, where it flows into path, which rises from Contrada Pomieri up to Gorgo Nero and then, after a couple uphill kilometers, reaches Portella di Mele at 1,500 mt. above sea level.
Continue along an ancient and beautiful trail leading into the beech woods on the left and through a continuous and progressive climb reaches Pizzo Inferno "pianetti" at 1.700 mt above sea level, just below the summit. The trail then continues for a short distance, even if a bit steeper, along a small ridge and then on natural terrain and easy rocks, reaching "Monte San Salvatore" summit at 1,912 mt highFrom the summit you will enjoy the two Petralia beautiful views, other Madonie picturesque villages, Nebrodi and the Etna.

Following the signs along the trail, located inside small sinkholes covered by low and bushy beech trees, the path comes down to "salletta" at 1780 mt above sea level, just above the Fontana Madonna dell'Alto, where also arrives, besides the dirt track that goes from Piano Iola, and Nociazzi (trail 553), the "Sentiero dei Pellegrini" that comes directly from Petralia Sottana. Therefore begins the final climb, about five hundred meters long, to the "Santuario della Madonna dell'Alto", at 1,827 mt above sea level, one of the highest in Italy, which can be reached after leaving to the right the dirt track that goes down to Petralia Sottana / Polizzi Generosa.

Find this trail on the APP
and let it guide you along the way
or download the KML file
Place
Parco delle Madonie
Points along the trail
Santuario Madonna dell'Alto
The shrine of Madonna dell'Alto (Mother of the Height), built at over 1800 meters above...
Ponte San Brancato
San Brancato bridge represents a very pictoresque place. Here the stone arch that straddles the... 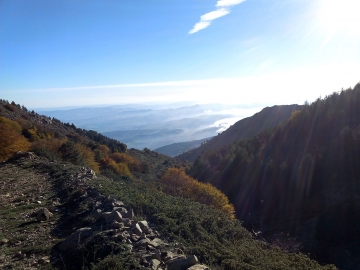 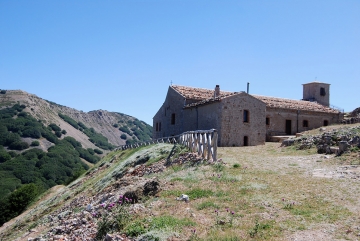 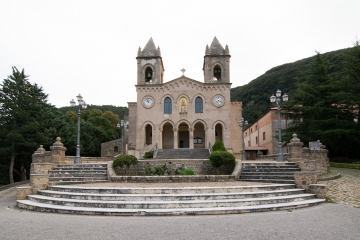