The shrine of Madonna dell'Alto (Mother of the Height), built at over 1800 meters above sea level, is probably set where there was the little chapel built by St. Guglielmo Goffi from Polizzi Generosa, who lived between XIII and XIV centuries

Undoubtedly, a place of worship dedicated to Madonna dell'Alto had already existed in 1454 when the Count of Caltabellotta, who was also lord of both Petralia Sottana and Soprana, granted the water of the springs of Madonna dell'Alto to Polizzi Generosa. Another document that attests the existence of that chapel is Notary Giovanni Predicanti Polizzi's act of 1464, in fact it names the road that goes to the chapel of Madonna dell?Alto

On the pedestal of Madonna dell'Alto's statue there is the date "1471", but we do not know if this date indicates its realization or its installation in the shrine.The legend, reported in the book "the privileges of the University of Petralia Sottana" (Notar Antonino Rossi's acts of 1777-1778), said that a case was found near Roccella, after the sinking of a vessel. It contained the marble statue of the Virgin. The discovers, moved by devotions, tried to carry the statue to Termini Imerese, but they could not place it there for mysterious reasons. Then, the statue was placed on a cart by oxen and left to fate. The depictions of this legend can be found in two folk art tiles that adorn the altar, where the statue of the Virgin is placed.

The statue of Madonna dell'Alto is a particular representation of the so called Virgin of the Milk, a Virgin that has a clear Spanish influence. The tradition attributed it to Domenico Gagini.

The inhabitants of Calcarelli, suburb of Castellana Sicula, make a pilgrimage to the Shrine the first sunday of July, meanwhile the inhabitants of Petralia Sottana have a century old tradition to celebrate an holiday in the first 15 days of August to worship the Mother their patroness, with volunteers in the Shrine to accomodate the pilgrims with food, beds and celebrating the mass many times a day. 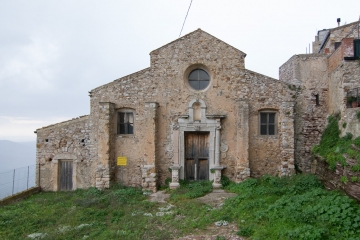 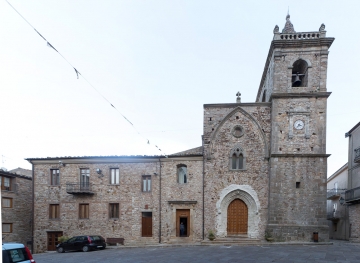