The church preserves the small "vara" of the Crucifix, one of the few surviving examples of an apparatus for processions; this was typically destined to be often renewed because of frequent use. During the sixteenth and seventeenth centuries the "vare", which contained statues or sculptures, had in fact replaced the wooden banners that served as insignia for many confraternities.

This small exemplar ("Varetta") was executed in 1630 by woodcarver Giuseppe Farullo Polizzi (and already restored in 1650 by Vincenzo Lo Presti) to hold a group with the Crucifix, the Virgin Mary, and St. John the Evangelist, which was probably pre-existing.

A wooden statue of St. Philip, completed before 1578, restored and gilded several times. The statue was originally equipped with a stool and a "vara" for processions (painted by Antonio Fazzuni from Palermo). In 1584 Domenico Coniglio carved the Crocifix. In 1609 Cosimo La Russa, the author of the statue of San Rocco, which is currently in the main church, created a wooden gate with statues to enclose the chapel, which is no longer preserved. In 1625 a statue of St. Ursula was made probably for this church but now it is lost. Finally, it should be mentioned a statue of the Immaculate Mary, made by Pietro Mignosi. During the mid-eighteenth century the church acquired some importance and became parish. The church of unknown origin is mentioned for the first time in a document dated 1573 regarding the repair of the portal. Other stone works are documented in 1596. In the same years the bell tower was rebuilt and the bell was ordered by a master smelter from Tortorici. Other documents concern the restoration of the arches of the church in 1620 and the reconstruction of the archway in 1628. The "majolicaro" Vincenzo Cellino Collesano in 1648 rebuilt the floor, a piece of which is still kept in a corner of the building. The floor is made of black and green majolica tiles with bluebells decor (defined in descriptions as "bullseye"). In 1664 the new portal was executed by stonemason Anthony Barchi, who owned a store in Caltavuturo. At the present day the church has a three naves with three apses plant, high lateral bell tower and a sixteenth century prospectus that opens onto an airy little square. The church of St. Philip is a religious building in Sclafani Bagni. 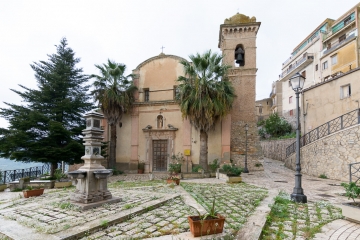 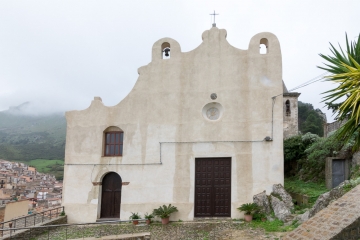 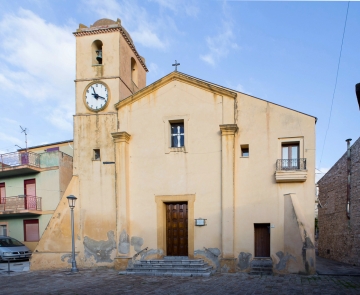