The Castle of Caccamo is one of the biggest and best preserved of all Italy and it is located on the top of a limestone cliff, which dominates the town and San Lorenzo river and Rosamarina lake valley.

Built as a fortress to defend the town from enemy invasions in 1190, in time has been expanded and transformed to become a rich residence for several noble Sicilian families.

The cliff where the castle is built has three steep walls on the northern, eastern and western side while on the southern one presents a constant slope which allowed the construction of the garden inside the walls and of the underlying Terravecchia district, the core from which the whole town has grown. The complex developed on structures connected each other in groups from different ages and on different height levels, forming closed and open courts. A ramp with narrow bends and dug into the rock connects the underlying village with the high court in the architectural complex.

The first building the visitors will see is the Prades wing (1400), composed by a stable and a courtroom, both restored. By entering the first court, it is possible to accede to Chiaramontana wing, remodeled and fortified many times during 1300 to resist Aragon attacks. Passing through a portal and near to a broken tower, you will reach the prison courtyard and the high court.

The high court and the Amato wing were remodeled during 1600 to make the castle a noble palace. The Amato wing is the most imposing building of the complex and was realized expanding the previous 300´s structure. This wooden ceiling hall represents the central axis of the residential wing. It overlooks the valley and the town and inside are preserved several original XVI century decorations, reproducing, in some cases, Amato family crest. 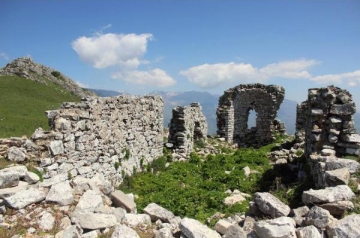