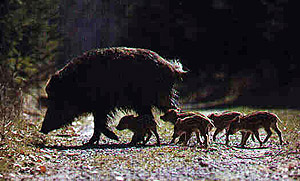 It has longer paws and it is more slender than domestic pig, of which is the progenitor. The snout is longer, conical and supplied of prominent and archy tusks in male adults. The fur is thick, bristly, black, and grey-brown mottled; young wild boars have a yellowish brown color with longitudinal, dark and grey stripes along the hips.
Body lenght: 110-180 cm; height 90-115 cm; weight 50-300 kg.

Palaearctic species widespread in Europe, Asia and North Africa. In Italy, it is more common on the Appennines chain, where its number is increasing.
Existing in Corsica and Sardinia, it died out in Siciliy at the end of the 19th century, but it has been reintroduced by the State Forest Company in different areas about 20 years ago.
Fifteen subspecies are recognised; these are suddivided into four great groups (Western, Eastern, Indian and Indonesian).
The ancient Sicilian population was small in size and so it should belong to maremmana majori or meridionalis sarda subspecies.
Nowdays, the wild boar lives in a variety of different habitats: from temperate zones of origin to the tropical and equatorial ones.
In Sicily, it mostly lives in Sicani Mounts, in Madonie it was less common and more localised. After the bastardization of the species, today it is at risk of extinction because of the unchecked hybrid population growth occurred during the last years.

It breeds at the age of 5-6 and lives about 20 years. Couplings take place in winter and
females give birth to 4-12 wild boars at a time (usually in spring).
The youngs are suckled for two to three months and they become indipendent at six months of age, but they often stay with the mother during all winter.
It is omnivore and particularly feeds on acorns, roots, tubers, field fruits, but it doesn’t disdain animal carcasses, eggs and bird hatchlings, insect larvae, worms and garbage. It also feeds on crops causing severe damages to farmes.

It is able to travel significant distances and move kilometres between refuge areas and the nutrition ones. It is mainly a nocturnal animal. Males are lonely animals and they live with females only in the reproduction period. Adult and young females form small groups with the youngs. It loves rolling around in the mud and rubbing itself on the tree logs.
It constantly dig underground holesand it can be locally very damaging.

It doesn’t have any preservation problems. In the protected areas, must undergo fanual management.