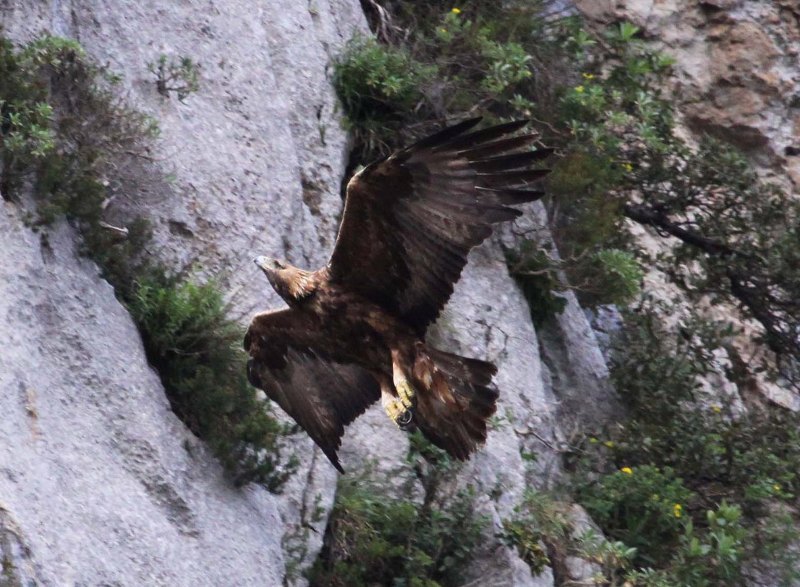 The chrysaetos eagle, “golden” in Greek, is so called because of its plumage light color that covers the head. The upper parts are brown, while the feathers and plumes are clearer.

The Golden Eagle has a length ranging from 74 to 87 cm and a wingspan that can reach 240 cm.
Its weight, however, can vary from 2.9 to 8 kg. Females are usually larger than males (even 20 percent bigger).

Golden eagles are present in Eurasia, North America and North Africa. In Madonie park there are several specimens that can be found in Scillato, Isnello, and Petralia areas.

Once they find a partner to spend their lifetime with, eagles establish a territory in which they will remain for many years, building more than a nest and choosing, year after year, the most beneficial one.

They nest on cliff sheer walls or, more rarely, on the tallest trees branches. The nests are always on a lower position compared to the hunting area, to facilitate the return with the prey grabbed in their talons.

Eagles feed mainly on mammals (such as rodents, hares, groundhogs and rabbits), birds and reptiles (especially snakes and turtles). They also feed regularly on animal carcasses in their territory.

Eagles, which often work in pairs, use two hunting techniques: ambush and flight-hunting. While one scares the prey, the other swoops, reaching even 250 km/h, captures the prey and leads it to high altitude, then lets it drop and killing it with the impact.

The mating occurs in March and is preceded by a ritual dance that includes spectacular aerial tricks and lasts several days.

After the coupling, the egg deposition usually takes place twice after 2-5 days between each one. Eggs hatch after about 43-45 days, but usually only one of the two chicks survives.
Eagle chicks take their first flight at 75 days old and become independent 160-170 days after birth. Only after 3-6 years, after finding a territory, they are ready to create a new family.

You can walk along the following trails to see the golden eagles in Madonie Park: