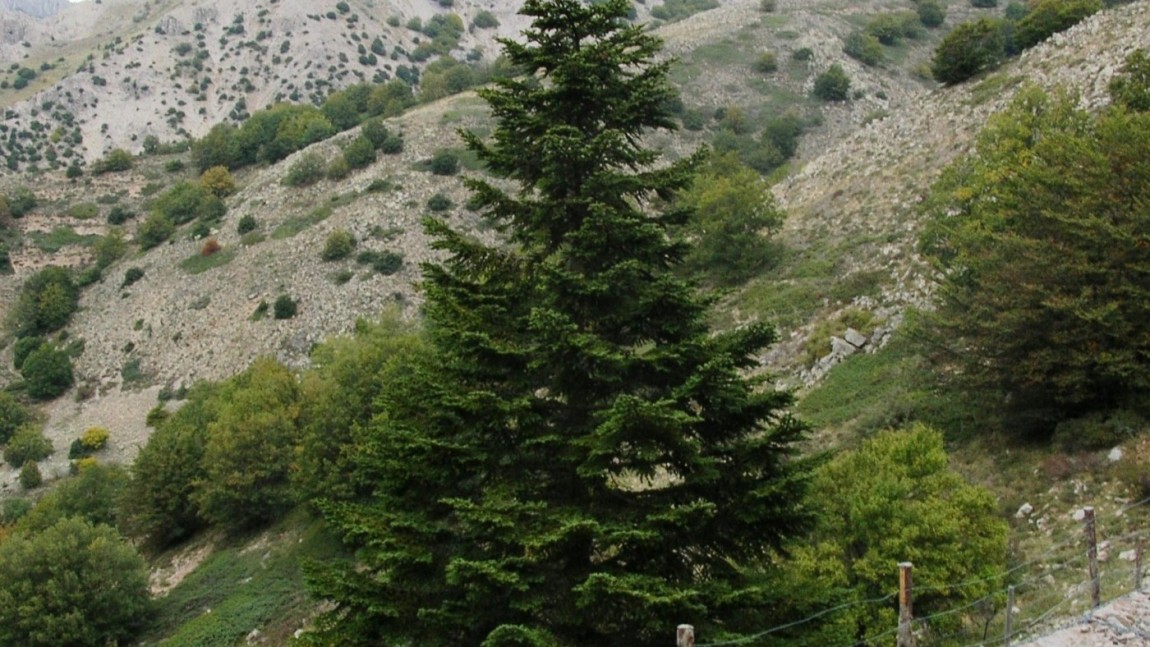 Once endemic in northern Sicily mountains, the Abies nebrodensis had been considered extinct since 1900.
It was rediscovered in 1957 in the Vallone degli Angeli inside Madonie area, where there are only around thirty specimens, probably survived thanks to isolation and the reduced competitiveness of other stronger local species, such as the beech (Fagus sylvatica).

The Abies nebrodensis is considered by IUCN a critically endangered species and it has been included in the list of the 50 most endangered plant species in the Mediterranean. In 2000, the Madonie Park has launched a LIFE Nature project for the conservation of this species.

Nowdays, another project is active, funded by the c.i.p.e. and called “Abies nebrodensis Conservation and Geraci Siculo peatlands restoration”. Many will be the objectives achieved at the end of the project and in 2009 it was already estimated that can be started the planting of 7,000 specimens of this rare and precious fir.

Probably this tree was very common in ancient times, certainly the Nebrodi fir timber had to be a very important trade source for northern Sicily mountain people, especially during Greek domination, to the point that the Halaesa city, a few kilometers from today’s Tusa (ME), minted coin with the this towering tree unmistakable image.

Within the Madonie territory is also located the Madonie Fir (Abies nebrodensis (Lojac.) Mattei), which constitutes the most emblematic endemic species in the homonymous Natural Park, but is nowdays endangered of extinction. Its population, in fact, is composed of only 30 individuals distributed discontinuously at altitude between 1,400 and 1,600 mt. above sea level, between the Vallone Madonna degli Angeli, Monte Scalone, Monte dei Pini and Monte Cavallo, in Polizzi Generosa Municipality territory. The Abies nebrodensis is included in Annexes II and IV of the Habitat Directive (92/43 / CEE) and its indigenous area in included in the SIC ITA 020016 and in the ZPS ITA 020050.

Among the conifers that characterize the Sicilian forest heritage, this species is the most famous, from an epiontological point of view and because of its forestal potential and its relict species condition, which is due to men activities that have modified its original habitats.
The loss of this specie would be a serious matter and would represent a further biodiversity reduction in the Mediterranean basin context.

In the Madonie territory and especially in Geraci Siculo Municipality domain there are several damp areas, which are indicated with the terms “margi” “urghi” and “triemule”. They are very important from an ecological and phytogeographical point of view, because they represent a real shelter for several microthermal species in Sicily (reflecting the glacial phenomenon influence in the Island), some of which reach Madonie extreme southern limit.
The “margi” are marshes fed by one or more limited springs whose slowly water flowing saturate the substrate and penetrate the soil that stay covered by a water veil apparently stationary.
The “margi” vegetation residues create imposing rotting layers, partially demolished, the accumulation of whose leads to peatlands formation that are real natural “archives” where are layered several forest species pollen, the ones which have characterized Madonie vegetation during the last 10,000 years.
The peatland — located in Pietra Giordano— is very significant, due to the presence of Abies nebrodensis pollen in its layers dating back somearound 10,000 years ago, which is currently rather impoverished because of artificial water collecting interventions.

The project objective is to continue and— in part— complete the actions implemented within the Life-Nature Project, through interventions aimed to the “biodiversity conservation and protected areas natural heritage defence.”
In particular, reforestation interventions will be implemented as well as grafts on exogenous Fir (alba Fir, cephalonica Fir), plants assignment, care for natural population, propagation material production of reliable genetic source, peatlands study and restoration. In addition will be provided formation and disclosure activities, as well as the preparation of a traveling exhibition and also a permanent through the creation of the Abies nebrodensis museum in Polizzi Generosa.
The final result will be to develop possible, traditional and innovative technical solutions to ensure the Madonie’s Firs genetic conservation and contribute significantly to Madonie Park biodiversity conservation.