The trail "Italy" is composed of several segments:

This Sentiero Italia stretch is closed from May to October, because of the safeguarding of the golden eagle nesting territories, which lie along the path that ends in "Casa di Mastro Peppino" in "Mandria Nipitalva" area. If you wish to continue on Sentiero Italia itinerary, you can return to the path starting from the shelter Luigi Orestano, following the SP 54 connecting Collesano to Petralia Sottana, or from Portella Colla, at the intersection between the SP 54 and the S.P. 119 which is a turning point towards Polizzi Generosa. During the nesting months, the path to follow instead is the "Deviazione SI per la salvaguardia della nidificazione dell'Aquila Reale", and then take again the "Sentiero Italia" when you arrive to Portella Colla.

This Sentiero Italia stretch is rather hard and suitable for experienced hikers only, because of a consistent altitude drop: the trail goes up through the croplands and then shrinks and rises through a series of hairpins from the base of a rocky peak at 740m of elevation, almost reaching its top at 960m of elevation and, even more, to 1436 meters of Casa Mastro Peppino, where you can stock up some water.

After that, you are in the Vallone Nipitalva, before you reach Casa di Mastro Peppino and Piano Cervi: large and open fluvial-karst depression, which has a small glacial lake in the middle, created by the thawing snow. Here the grassland takes the place of the beech woods that, however, dominates unopposed all the North West area of the plateau, where it forms a complex and lush beech forest. Such things give this place the typical appearance of the high mountains, in which intense and complex landscapes are among the most evocative that the Park can offer to its visitors.

The path climbs allowing to enjoy the view of the mount Cervi, then goes back to the beech forest descending into the State Forest Area until it reaches its access gate. The trail arrives to Portella Colla, at 1420 mt above sea level, where it's possible to see the mountain complex of Antenna Grande. Here starts the second part of the Sentiero Italia that leads to Petralia Sottana.

In Piano Battaglia begins this stretch of the trail that lets you reach Madonna dell' Alto.

You proceed along the path, well marked by animal passage, until you reach Case Faguara. You walk along the river passing through Vallone Faguara (valley) reaching the lower Case la Pazza.
Traversed the tract of the provincial street 54, continue on the trail where you can reach the sactuary "Madonna dell'Alto" situated over 1,800 meters of elevation: rising from contrada Pomieri at 1346 meters above sea level, it crosses contrada Canna located at the foot of Mount Canna. Next comes the Vallone Madonna degli Angeli reforestation area where you will take the "Sentiero degli Abies nebrodensis". Considered to be extinct in 1900, the Abies nebrodensis was rediscovered in 1957 in Vallone Madonna degli Angeli in the Madonie, where there are only about thirty specimens, probably survived thanks to the isolation and the reduced stronger local species competitiveness, such as beech. Along the way, you can see some in the protection fences.

The trail continues climbing up to the sanctuary of Madonna dell'Alto at 1819 meters above sea level from where you can enjoy one of the most beautiful view in whole Madonie area.

This stretch connects Petralia Sottana with Geraci Siculo. Crossing Contrada Savochella, after crossing Portella Ferrone gate at 1160 meters above sea level, you reach the Gorgo Pollicino, a very important humid environment valuable for migratory birds.
Slightly rising you will cross the junction to Casa Bottino at 1310 meters above sea level, continuing on an open track and passing close to several water sources and troughs. In last slightly downhill stretch you reach a forest service trail that winds through the trees on its way to Geraci Siculo and the old fountain where the route ends. 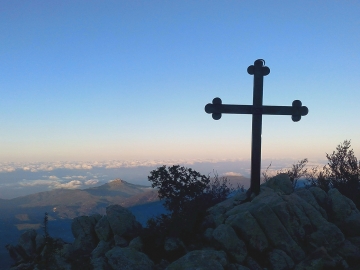 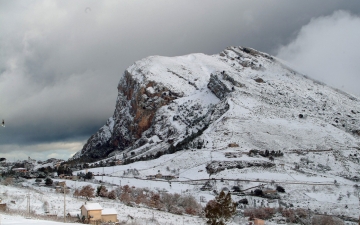 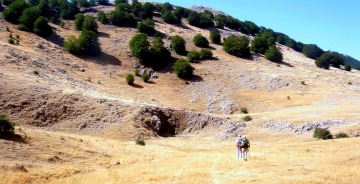