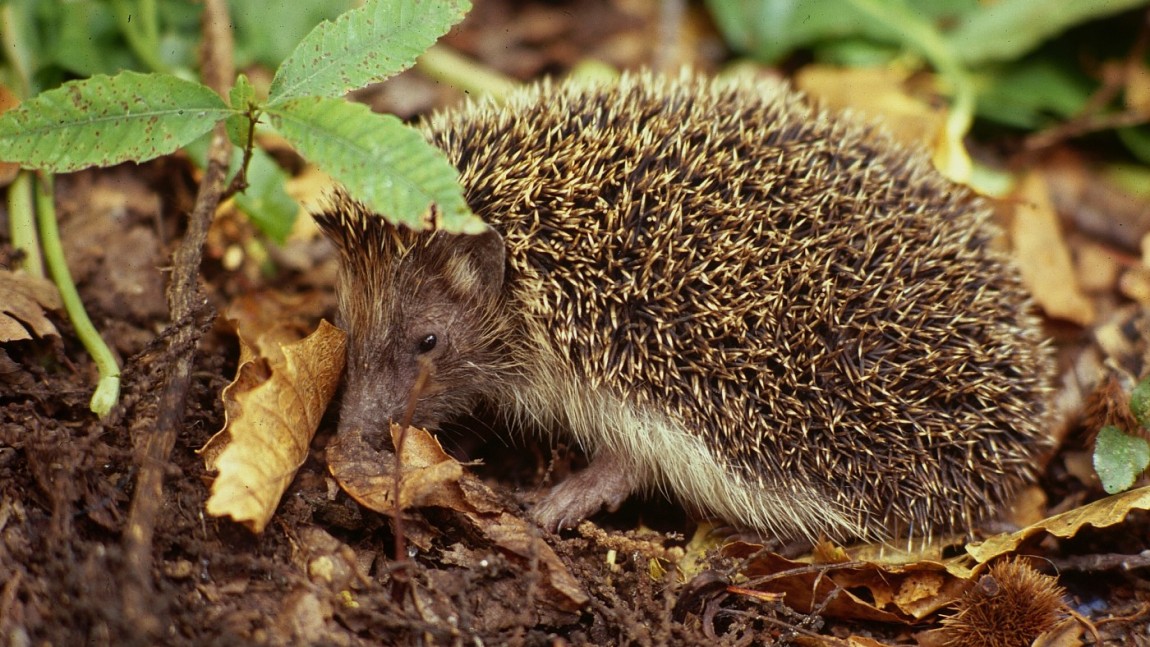 The European hedgehog is a small animal (body length: 230-290 mm, adult weight: 400-1100 g) with the body entirely covered with short and thick spines, except for a narrow naked strip on the neck.

These act as armor for the defense; in fact when the hedgehogs are threatened, they roll themselves into a ball, thanks to the two lateral muscles action, forming a real ball of thorns difficult to prey.

It’s easily recognized by its rounded silhouette, pointed snout, bright round eyes, small oval ears. The paws are short, slightly longer in the front, and have five toes, the big toe is very well developed and equipped with strong nails.

The tail is very short, hidden between the rear spines. The color of the belly is uniform but varies widely from hedgehog to hedgehog. The absence of the white spot on the chest helps us distinguish between the western hedgehog from the eastern one; the two species are still distributed along different regions and live together only in a narrow North East European area.

Hearing is definitely the finest and most developed sense but also smell and sight are useful for these animals. In case of danger they emit whistles and murmurs similar to those of snakes, while during feeding they emit mumble and nasal grunts.

In Madonie it is quite frequent, though not easy to meet. It lives in wooded areas with low vegetation, but it is also widespread in meadows and open fields, especially in cool and sheltered places such as hedges, bushes, embankments and slopes.

In mild and temperate environments of the Mediterranean islands, hibernation of this small mammal is reduced and intermittently, while in continental areas it lasts from November to March. It feeds mainly on insects, mollusks and other invertebrates, but it can also prey on small birds, amphibians, reptiles and small mammals.

It’s characteristic its ability to capture the snakes, including vipers, who manages to kill biting them and protecting itself with its armor of thorns. By this particular quality it has earned a special sympathy of the country people.

The worst “enemies” of the hedgehog are the fox, which makes it unroll urinating above, and the marten, but in recent decades a new threat is hanging over these cute animals, that of cars. The hedgehog is indeed the most common mammalian road fatality in Sicily and in the rest of Europe.