Atop on a massive basalt rock, at whose foothills rise the city of Geraci, the ancient and glorious vestiges of Geraci "Manor" can be seen. This construction was considered the first western defence of the wide Shire. The place is very suitable for its purpose because of its inaccessible location. On the Northern, Eastern and Southern side the manor was defended by nature itself, while in the places where the rock presented some strategic weakness, were built some walls to make the fortress inexpugnable. From the Western side, a path across the slope led to a plain in front of the drawbridge, which, once raised, showed the moat abyss. From a military-technical point of view Geraci fortress showed to be a powerful structure and a strong resistance making it almost unassailable.

The interiors were distributed and placed militarily, without any luxury. The fortress held many garrisons and was prepared to resist many assaults. The building irregular plant followed the rocks inequality. Service areas were located underground, where food supplies, water tanks and prisons were kept. The groundfloor held stables, kitchens, weapons rooms, ovens, vassals and armigers locals and the slits on the walls for shooters. The upper floor was used as residence for the Count family, offices for administrative services, for coordinating council and logistic plans. Battlements crowned the building. The only vulnerable spot was the moat side. In the court there was a secret passage leading to the moat, through whom the castle plain could be reached; another underground path, carved in stone, lead to the Chiesa di St. Bartholomew, outside the walls. A water tank could be found at the end of the path.

It is very likely that the construction was built by greek-byzantine, while a moorish window testify the Arab domination; later the Normans transformed it for war purposes. With Aragon and Ventimiglia family it became a true and proper military fortress. During the same period the city was surrounded by walls with huge portals in some strategic points: "Porticella Superiore, Porticella Mediana, Porticella Inferiore, Porta Baciamano, Porta Santa Maria". Nowadays still their signs can be seen.

In 840 Geraci fortress was conquered by the emir "Ibni Timna", who extended and modified it. In 1062 Ruggero I the Norman took Geraci city and gave it in vassallage to his nephew "Serlone". In 1169 the Count Ruggero from Creone built more defences for the fortress. In 1269 Geraci fortress reappeared in war annals.

With the end of Swabian dynasty, after the defeats suffered by Manfredi in Garigliano (1266) and by Corradino in Tagliacozzo (1268), Sicilian partisans tried to hinder the Angevins, unsuccessfully. Then Charles of Anjou crushed the partisan and also Arrigo Ventimiglia, who was ousted after a fierce siege of the Geraci Castle.

In 1337, Francesco I Ventimiglia was accused of treason for refusing to take part to the Parliaments organized by the king. The king, incited by the Chiaramonte and Palizzi family, bitter enemies of Ventimiglia family, assaulted Geraci fortress that was conquered thanks to the Geraci inhabitants who opened the doors, not willing to partecipate the fight. (the door from which the besiegers entered was called "Baciamano - to kiss someone hand" because Geraci people kneel down to the king kissing his hand, as submission sign). The count lost his life trying to run. The episode of his death is not very clear. Some say that he jumped from the cliff (nowdays Mandolilla alley) with a blindfolded horse; others say that he was robbed and killed by two men; more likely, during the siege he was injured by the Count Valguarnera and when he was given to his soldiers, they killed him making havoc of his body. It was the 3 February 1338. The people of Geraci remember the event with these verses: "CASTEDDU DI JRAGI MALIDITTU - ROCCA VISTUTA DI SANGU E DI LUTTU."

Nowdays only the fortress ruins survive whose architectural lines are difficult to settle. Just the cut off corners of the towers, the slots glimpses, the moorish window, the underground paths heavy arches and the empty tanks or full of debris can be seen. Only the small St. Anne church rises over the ruins. This church once preserved St. Anne simulacrum (her skull), later moved to Castelbuono.

Another achievement has been completed toward this Community redemption. Thanks to the municipality administration efforts, the Ventimiglia Castle Archeological Park has been realised. This proves a great attention to a site which, over years, still preserves intact the memories of Geraci "golden era". The excavation and cleaning works revealed architectural structures, traces of flooring, exterior walls and towers, redrowing the ancient fortress perimeter.

In the first phase took place the cleaning of the walls overlooking St. Anne church main facade, and then of the turf. On the north side the original floor realized with flat placed stones has been highlighted. While emptying the tank it was discovered the entire access hall to the compartment tank where a medieval bronze coin was found. Under the floor can be seen a filling channel for the tank.

The floorings: Once removed the vegetation layers, it was discovered the surviving types of floors, the floor pattern of the churchyard in front of the Castle church and the bleachers which once connected St. Julian square with the side entrance of the church.

The tanks: These structure were used to collect rain water. The interior surfaces are barrel vaulted. The intervention has focused on the structure stability and to the preservation of the bits of plaster in earthenware.

The masonry: In this case, the intervention was focused on cleaning and restoring walls placed in the areas near to the church. The cleaning operation were performed by hand with sorghum brush and biocides to eliminate the chemical and mechanic deterioration. The structure is untouched, no works has been done to bring it back to its former glory. This way the site does not show splendor of the medieval Castle but allow visitors to sense history passage.

The tower: The works (cleaning from infesting agents, reconstruction of the mortar through injection, etc.) had the aim of pure conservation. What has arrived to our days is just a shred of a cantonal of one Castle towers.

The manor stones continue to tell us the lives, loves, battles, histories and legends of a town which deeply influenced political, military and cultural events of the 14th century Sicily.

Visiting the site is possible to feel an atmosphere full of power, strength and greatness. The manor, whose fortress overlooks Geraci, leans on a natural sill, allowing people to admire Sicily treasures and gems. From here, the island rulers have written some of the most beautiful and exciting history pages of Geraci, of Ventimiglia family and of the whole Sicily. 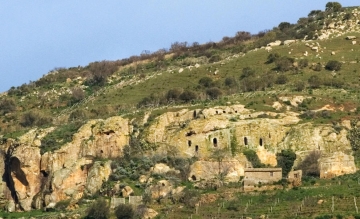