Founded in 648 B.C. by Greeks of Chalcidian and Doric origin, Himera had a very favorable location for the development of a Greek colony, at the center of a wide gulf between the headlands of Cefalu and Termini Imerese, and near the Imera Settentrionale river mouth, important artery connecting to the central Sicily.

The city rapidly achieved building and demographic development, which is documented in large urban establishment realized from the first half of the sixth century b.C. and in the monumentality of the sanctuary of Athena at the top of the "polis". An epigraph found in Samo recalls moments of tension with the indigenous population from the hinterland ("sicani"), disagreements which probably forced the Himerians, around the middle of the sixth century b.C., to seek help from Phalaris, tyrant of Agrigento. Even with the Carthaginians from the nearby cities of Palermo and Solunto the relationship was not always peaceful. In the early fifth century b.C. the tyrant Terillo, expelled from the city with the help of Terone tyrant of Agrigento, took refuge in Reggio and sought help from the Carthaginians, who sent a strong army in Sicily. A coalition of Sicilian Greeks victoriously faced the Carthaginians in an epic battle, fought under the walls of Himera in 480 b.C., so the Temple of Victory was built in the lower town. In the following years, the city was subjected to the political control of Terone, who favored the repopulation with Doric people. The Himerians soon regained independence from Agrigento and were not involved in important episodes of the history of the island until 415 b.C., when an himerian contingent took part in the battle "dell'Assinaro", in which they fought alongside Syracuse against the Athenians. At the end of the fifth century, the fate of Himera was fulfilled: in 409 b.C., as part of yet another clash with the Carthaginians, the city was destroyed. The population suffered different destinies: some scattered throughout the countryside, others participated in the founding of the Carthaginians Thermai Himeraiai (Termini Imerese); a small group continued probably to live on the site of the polis, as the remains of houses built on the destruction layers of the city demonstrate.

Himera boasted among its citizens illustrious individuals such as the lyric poet Stesicoro and several winning athletes of the Olympic Games.

The site was inhabited in the following Roman and medieval age: a Roman villa was built in the western part of the greek town, while around the ruins of the Temple of Victory a manor house (Odesver) was built during the Norman period.

The settlement and the necropolis

The organization of the city is one of the most interesting aspects of the greek colonial world, to which Himera provided a significant contribution. Little is known of the first phase of its existence (from the mid-seventh century b.C. to the early sixth century b.C.); in the first half of the sixth century b.C. two different and distinct regular urban planning systems were designed; these, characterized by orthogonal streets that marked out the city blocks, were oriented North-South on the plains, in the lower city, and East-West on the hills, in the upper town. A special place was reserved for sanctuaries. The best known one, the Temenos of Athena, occupies the north-eastern upper city part, while in the lower town a great sanctuary included the Temple of Victory. Then small neighborhood shrines arose within the city. The entire urban area was defended by walls. The necropolises were located along the main exit routes. A well known one is the eastern necropolis, placed at the beach, on the east side of the river Imera, in district Pestavecchia. The southern one is in the locality Scacciapidocchi, near the road to the hinterland; in the west, finally, two notable necropolis areas: the slopes of Piano del Tamburino and Piana di Buonfornello.

Designed by Franco Minissi, the Antiquarium was inaugurated in 1984; closed several years for refurbishment, it finally reopened in 2001. There are preserved the most notable objects found in the excavations of Himera and other sites located in the area of the polis. The exhibition space, on various levels connected by ramps, runs along an itinerary that traces the major historical and cultural difficulties of the Greek colony and its surroundings. In the entrance room didactic panels introduce the history and topography of the site, while an exhibition space is devoted to the eaves in the shape of a lion's head from the temple Tempio della Vittoria and the medals. The tour proceeds to the "upper level" which displays architectural elements and offerings from Temenos of Athena, in the upper city. The "middle level" is dedicated to the objects of "material culture" coming from the excavations made in the various areas of the town. The "lower level" includes a selection of vases and kits from the Necropolis; a section dedicated to important sites of the area such as Terravecchia di Cuti, Monte Riparato, Mura Pregne/Brucato, Cefalù and a display of underwater finds. The visit ends with the polychrome mosaic of African tradition, found in the Roman villa of Settefrati, situated on a ridge overlooking the sea, in the west of Cefalù. 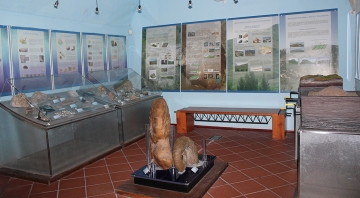