About 4 km south-west of Gratteri rise the impressive remains of the abbey dedicated to St. George by Ruggero II to fulfill its promise made during the battle of Cerami, when he saw an unknown knight covered with shiny weapons, above a white horse, holding white flag with a cross similar to St. George.

The abbey is located at 668 meters above sea level on Pizzo Dipilo slopes and near to the old dirt road that, passing through Gratteri territory, leads to Messina. St. George church, despite its preservation state, still shows all its power and beauty. The view opens directly to the sea, observing the Torre Roccella and Termini Imerese Gulf almost to Bagheria, while remaining hidden in the dense forest.

The foundation is attributed to pope Innocenzo II (1130-1142, recognized as legitimate pope in Sicily only in 1139), probably in the years between 1140 and 1142. However a 1115 document proves the abbey previous existence; in this document, in fact, King Guglielmo I, called Malo, gave several Petralia lands to the "venerable and sacred institution of St. George in Crateri". According to some experts, the remains of the building could also be attributed to the previous century. A 1182 edict made by Pope Luco III confirms the canonical goods and privileges acquired at the time of its founding and lists the churches included at that time in the St. George priory (San Leonardo in Isnello, San Nicola in Gratteri, San Cataldo in Partinico and San Pietro in Prato of Gangi). With a 1191 diploma Tancredi granted many privileges to the abbey in memory of his father.

The abbey was entrusted to the Premonstratensian monks, who perhaps came from the Saint-Josse-au-Bois rectory, in the diocese of Amiens in France. This award is part of the support which the Normans gave in Sicily to Western monasticism, as opposed to the Eastern one, which had spread during Byzantine domination. Local tradition says that Ruggero himself gave the Abbey site to the French monks as repayment for their work performed for the design and construction of Cefalú Cathedral, with which the abbey shares many architectural and symbolic elements.

Despite the privileges, the abbey began to decline from 1223, becoming firstly a "commenda" and then simply "beneficio". Around 1305 the rectory was eliminated and the monks expelled. Later a "commenda" is quoted as definitely abandoned on 1645 and in the middle of XIX century Abbot Vito Amico in his "Dictionary of Sicily topographic" mentions the church, still open for worship, as belonging to the order of the Malta Knights. The building fell into disrepair, was then used over the centuries by farmers as a stable and hay storage, and in the darkest periods of the Second World War, as arable land. Currently only few vestiges of the imposing building, subject of a recent restoration, remain: some decorative elements and the church perimeter walls stand out; the building has a basilica plant with three naves, three apses on the eastern side of the bottom, of which only the central one is protruding to exterior, with decorative pilasters similar to the Cefalù Cathedral one.

The apse masonry is in rustication with recesses on the corners to accommodate columns alveolar. The other walls are made with shapeless rubble, with the exception of narrow windows frames. The still visible part of the prospectus presents a central portal with side blind arches. The arched portal keeps a "broken sticks" decoration similar to that found in the Cefalù cathedral and the columns capitals once inserted into the piers.  Two transverse attached arches on the sides of the portal allow to assume the presence of a porch. 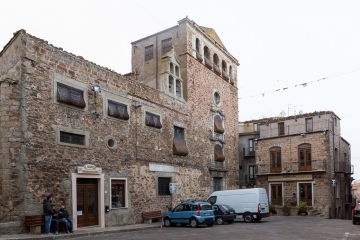 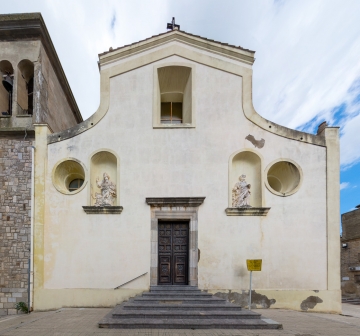