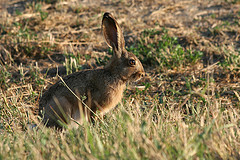 Endemic to the Mediterranean region, it is present only in Central and Southern Italy, and Sicily. It lives in open, cultivated, meadow areas, and medium-high and high hills. In Madonie, where it practically disappeared, it is now, after ten years of protection, easy to meet especially at the edge of the wooded spaces of medium to high mountain areas bordering open ones.

It is a quite long-lived animal, whose life expectancy can be up to about 10 years. The mating season is from October to March each year. Hares are born in the late spring and secondarily through the summer until early autumn.

It is a quite frugal herbivore and adapts to eat any type of vegetable food: shoots, roots, tubers, barks, fruits, etc. Having crepuscular and nocturnal habits, it does not build burrows but finds shelter among rocks and vegetation, especially dense and thorny.

Its speed and cunning are characteristic: if unearthed, it leaves the shelter after an elaborate set of waste, jumps, rounds that serve to confuse its scent trail and throw off any predator. Today in Sicily hares are in sharp decline almost everywhere, except in parks and national parks where they are protected from hunting and don’t find compromised or degraded environmental conditions so that their recovery is allowed.