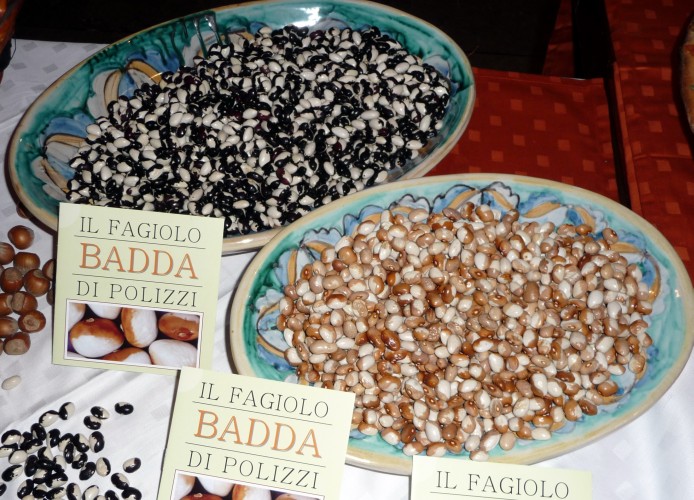 The small treasure of Madionie food traditions.
For more than two centuries in Polizzi Generosa gardens, inside the Madonie Natural Park, grows a small-medium rounded bean, called in dialect “badda”, which means ball.

It’s a bean uniquely coloured with two tones, with a clear division between the two distinct colours which may be ivory with pink and orange spots, or ivory with dark purple, almost black, spots. It is definitely two local ecotypes which have acclimated during time in Polizzi territory hilly areas.

In Polizzi the bean is also called “white badda” or “badda niura” or “munachedda”, if it is prevalent pink, orange or black.
“Badda” beans grow in small family gardens and farmers in the area were keepers of the original seed for centuries.

The beans will grow around four rods arranged in the shape of small hut: “u pagghiaru”. The green pods collection, the “fasoli virdi”, begins after around 60 days and according to their quantity can last until November. The dried beans collection instead take place from October to November, before the pods opens and lets the seed fall.

It is a savory bean, with herbal notes, even brackish, slightly astringent, with chestnut and almond hints. Through cooking it acquires a right creaminess, without flaking. It is also highly digestible and it does not cause swelling during digestion.

The “Consorzio di Valorizzazione e Tutela” (Consortium for Enhancement and Protection) recently set up after the establishment of the Slow Food Presidium, wants to expand the knowledge and develop the Badda Bean cultivation in collaboration with local authorities and technical and scientific institutions.